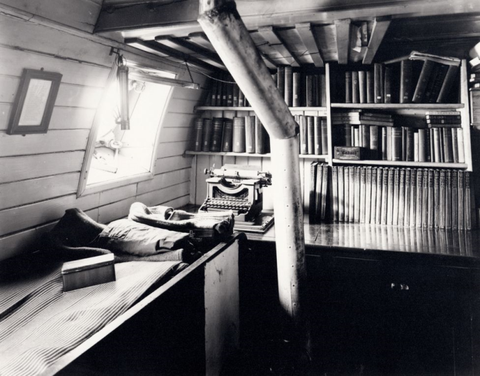 A photograph of Shackleton’s cabin aboard the Endurance taken by Australian photographer Frank Hurley in March 1915. THE ROYAL GEOGRAPHICAL SOCIETY WITH THE INSTITUTE OF BRITISH GEOGRAPHERS

Laurie Doan reflects on the past year for National Library Week 2021.

Before I was a librarian, I was the class optimist of the Class of ’79 and an avid reader of survival stories. The story that intrigued me most was Earnest Shackleton, whose goal was to pass through the South Pole via Antarctica. His ship, Endurance, became ice-locked and Shackleton and his men were on the ice for almost two years; no one died.

The Endurance crew was rescued by Shackleton in 1916, just before the 1918 Pandemic.

Fast forward to 2020. The Covid-19 Pandemic hit, and fear and uncertainty gripped the nation; there was a feeling that we, too, had become locked-in with no end to it in sight. It was then I remembered and was inspired by Shackleton’s words, “Need to put footprint of courage into stirrup of patience.”

This year, under the direction of Library Director Chris Kibler and Township Manager Bill Martin, and working under adverse conditions, my co-workers and I faced numerous difficulties and overcame them together.

My journey as the librarian for teens involved establishing programs online that would help to keep the students occupied and inspired. We kept ourselves going with daily meetings of journaling and reading aloud, game-nights, and our Friday night Roundtable Discussions.

We also held special programs, including our month-long College Admission Workshop. We performed an online play. We worked with UK theater director Nadia Papachronopoulou and teaching artists Max Mooney and Sarah Boess on the “Shakespeare in Isolation” film project. Students reimagined a scene from Shakespeare’s original plays using quarantine as a backdrop.

Through our Monday Morning Meetings, I was also aware of the outstanding efforts of others. We brought new traditions of Zoom Storytime’s, Art Journaling, Sewing Kits, Kindness Kits, and a Plant Club and much more from the Children’s Department. From the adult department, we explored meditation, solving crime, the history of food trucks; the list is endless.

The Reference Department continued to answer questions both in-person and online. We helped patrons navigate social services during the Pandemic and with simple questions such as converting a bread recipe from the metric system to the measuring cup in our kitchen. My favorite question was from a teen who asked about where to adopt a dog. He’d wanted a dog for so long, and he wasn’t the only young person who got his wish during quarantine.

We also went viral (okay, maybe not viral, but we were impressed with the numbers) with our We Got that Database (All About that Bass Library Parody)

But there were quiet times too and times of toil that we could have never imagined. With a limited staff, everyone worked harder to keep the ship afloat than we ever have. I’m sure we all felt as if we were on a storm-tossed ship with “all hands on deck” and a “heave-ho!” and an occasional “throw me a lifeline” but never once an “abandon ship.”

As I worked the night shift, especially when we were closed to the public, my heart warmed by the sheer number of books going out and coming back. The library continued to provide books and movies, and games through contactless pick-up. We somehow managed to thrive in this uncertain time.

Importantly, every book I pulled out of the night deposit box made me hopeful for the reader. I smiled when I saw the baking books going out in large numbers. Also on loan were backyard birding books, novels of daring and espionage, love stories, fable & fairy tales, and a host of diverse books exploring where we were as a country in 2020 and where we go from here.

For National Library Week, I want to salute the spirit of the crew of the Endurance. I want to salute my co-workers for their persistence in keeping Tredyffrin Libraries a relevant source of joy and consolation for our community in this time of distress. I especially want to salute Tredyffrin Township residents for having the forethought and optimism to know that a library will keep you sane in troubled times.   As Shackleton said, “The quality I look for most is optimism: especially optimism in the face of reverses and apparent defeat. Optimism is true moral courage.”

Check the catalog for:

The Snowman is 9.
The Snowflake is 3.

Of course you hid it in the juicer so Angelica Tompkins couldn’t get it! Type JUICER as the password on this page.

Why are you so disorganized?! You never would have put it here!